Between Us is the latest artistic project by Daria Pietryka, born in 1983, a Wroclaw-based painter, architect, interior and exhibition set designer. The subject of the exhibition is human relations – a broad, multilayered and dynamic issue. Humans as social beings are entangled in a network of micro and macro relationships – with themselves, with others, with the surrounding world. The relation itself is treated as a process, because our relationships are dynamic, they change, evolve, require work, sacrifice and attention. Neglected they get complicated or simply end. Pietryka carefully observes herself in the world, collects experiences, notes observations, questions and problems, and examines the emotions accompanying them. From that very moment images begin to appear in her head. It all starts with an experience, an observation and a feeling. Then it’s the time for reflection and sketches. Finishing paintings takes a lot of time and work, the artist changes them many times, applies subsequent layers of paint, interferes with the canvas with thread, sand, colour, builds a multilayer structure. Thus, another protagonist of the exhibition is painting itself, both in the context of skill and craft, but also as a form of complex narration.

For Daria, painting is a kind of meditation, a journey inside herself and another person. She paints what she cannot convey in words. Things that inspire her are life, experiences, places, traveling, books, and everyday life, which she does not consider dull or monotonous. Painting is her way of dealing with emotions and working out the world around her. It is closely connected to her thought process. In one of her interviews she stated that she would have to stop thinking in order to stop painting.”

The coherence of intellectual and painting experiments can be found in all the artist’s work so far. The series of paintings entitled Dirt and Little Destruction Project are full of existential symbolism. Paintings, depicting pale, cool figures whose bodies resemble statues carved out of stone, often incomplete, crumbling and falling apart, are telling dark and melancholic stories about what we experience. Also noteworthy are her works inspired by travels to Japan and China (series On the perimeter and China China), which explore the coexistence of nature and architecture. The canvases are filled with a thicket of buildings and streets connected by looped electric cables – these urban landscapes instantly bring to mind Asian aesthetics and the typical compact urban tissue: a bright palette of colors, a surprising lightness in all this density. In those works Daria reviews the relations between nature and the ubiquitous, spreading cities – human habitats; she wonders if there is still a balance between what is natural and what we – humans have created.

In the series Between Us, Daria returns to the observation of herself and others and expands these thoughts by exploring the subject of our relations. Between Us is not an autobiographical exhibition, but it naturally draws on everyday life, which presents us with a great variety of themes: being a person in the world, in a community, in the family, in motherhood, in relationships, in friendships and with oneself, and finally – being a woman in the aforementioned universe. There is also a subtle thread of our relationship with nature – we are part of the natural world and we need to connect with it, but entangled in modernity we often forget about it. In her paintings, Daria takes on these subjects and the emotions associated with them and celebrates the process, both in the context of human experience in the world and of her painting craft.

She portraits love stories of a couple, which strike the viewer with sober look and maturity. The artist gives up idealized visions in favour of an honest celebration of love as an art of choice, compromise, working on oneself and with one another, accepting flaws or limitations of one’s own and of others. Each love relationship is governed by its own rhythm, we attract and disgust each other, we set and push the boundaries, sometimes we live with each other and sometimes next to each other, waves of passion come and go. In such a dynamic scenery you have to be an alert observer and a participant at the same time.

Losing oneself in relations and regaining oneself is a theme present in the paintings dealing with motherhood, in which Pietryka persistently avoids glorification. Her madonnas lose their heads, bodies and their own identity for the sake of the higher purpose that is new life, new person. This very painful aspect of women’s sacrifice, which is not talked about or considered the natural turn of things, resounds loudly here.

The vessel of these micro and macro stories, experiences and emotions is the body. The body is what we have and what is familiar and close to us, it is our daily companion and personal territory, although the female body often becomes a battlefield for entire communities. For Pietryka, the bodies of her paintings’ subjects become the territory of research of painterly solutions. The skin that used to be pale, stone-like and matte in her earlier works, now takes on life and colour. Vague faces emphasize the universality of characters and experiences present in the paintings.

Ambiguity plays an important role in the Between Us project, which is the fruit of insightful observations and deliberations, as well as painting experiments. Pietryka does not care about issuing opinions or commenting on reality in a specific way. She treats her paintings more as an invitation for the viewer to interpret freely and individually, as a feast for the imagination; thus her works are constructed with the aim of catching our attention. The elements of this strategy are the composition which arouses tension and anxiety, the applied colors and their contrasts, a multidimensional structure of the painting where one can see the paint work and numerous interferences in the canvas, elements of collage.

Text by Marta Dziedziniewicz – curator of the exhibition 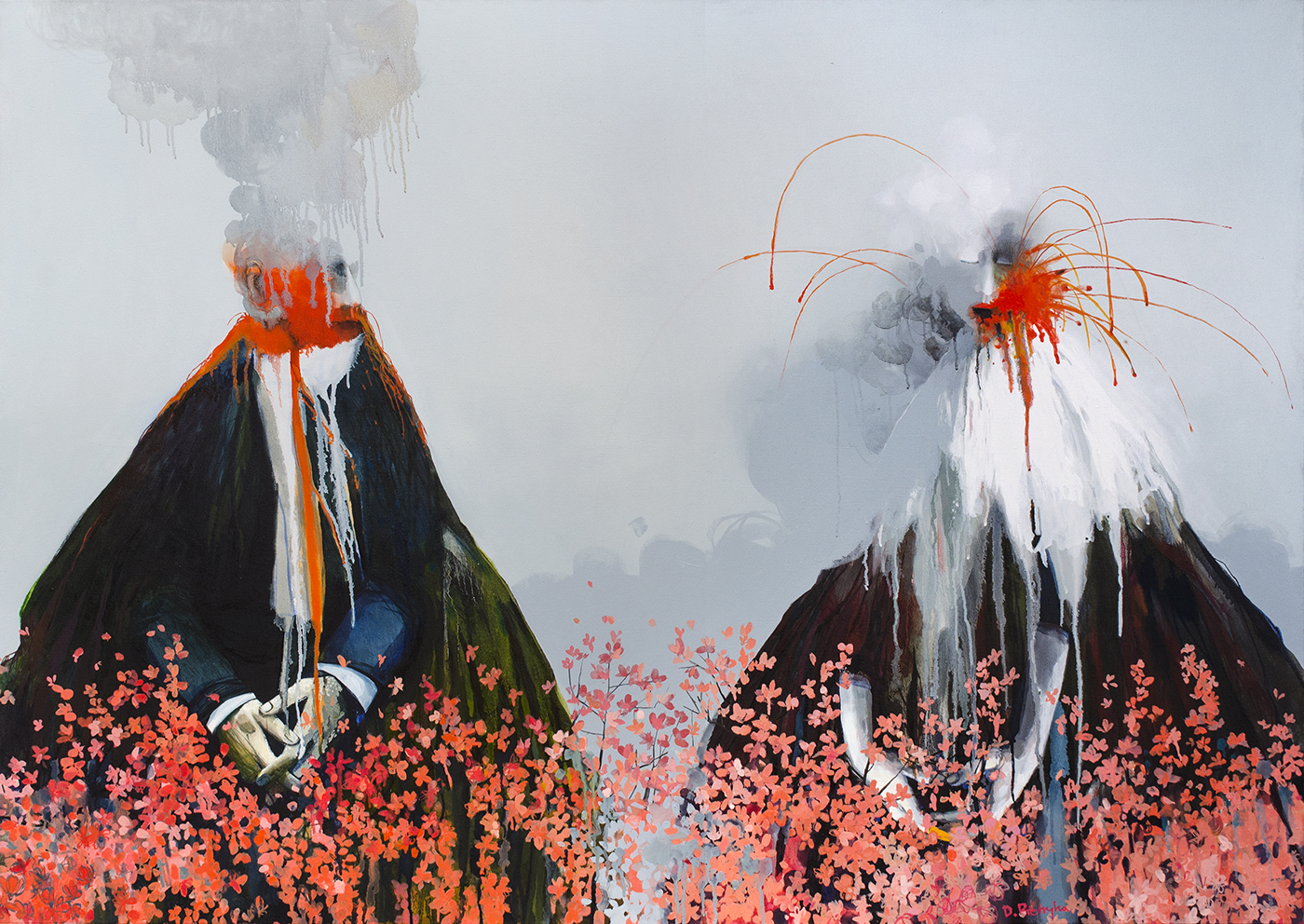 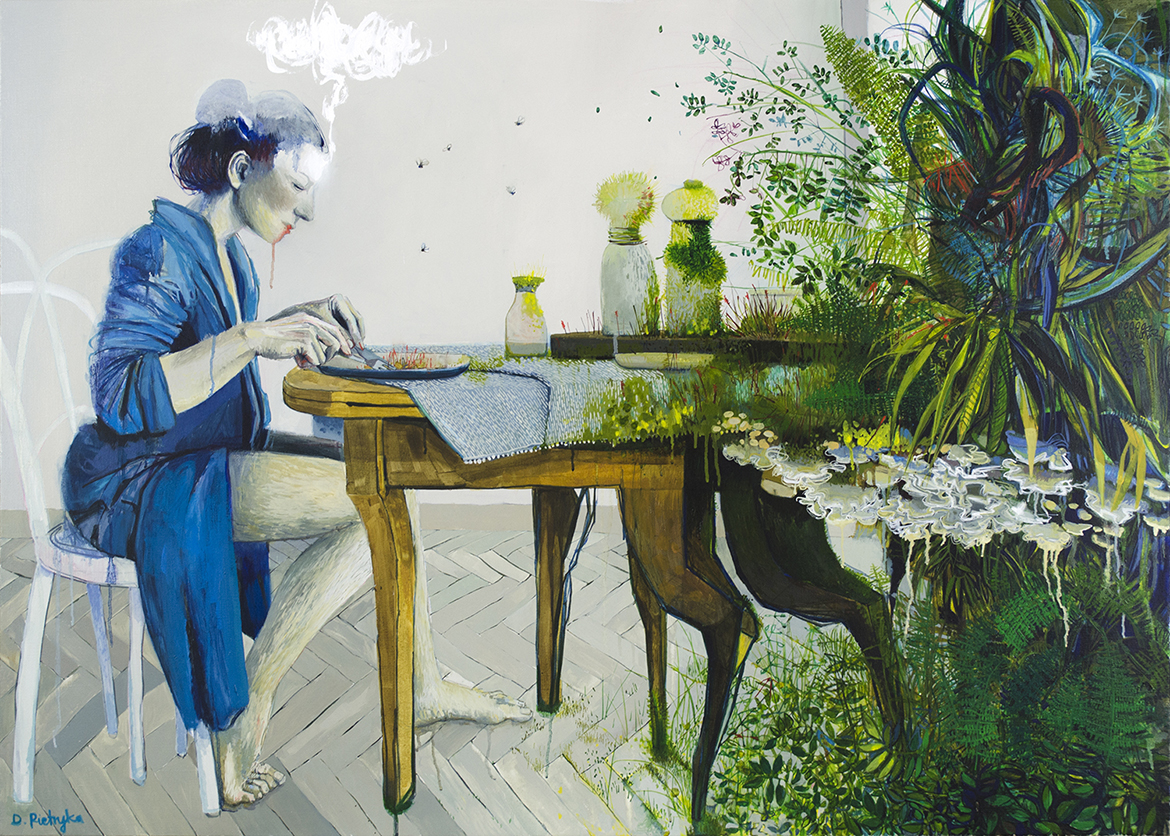 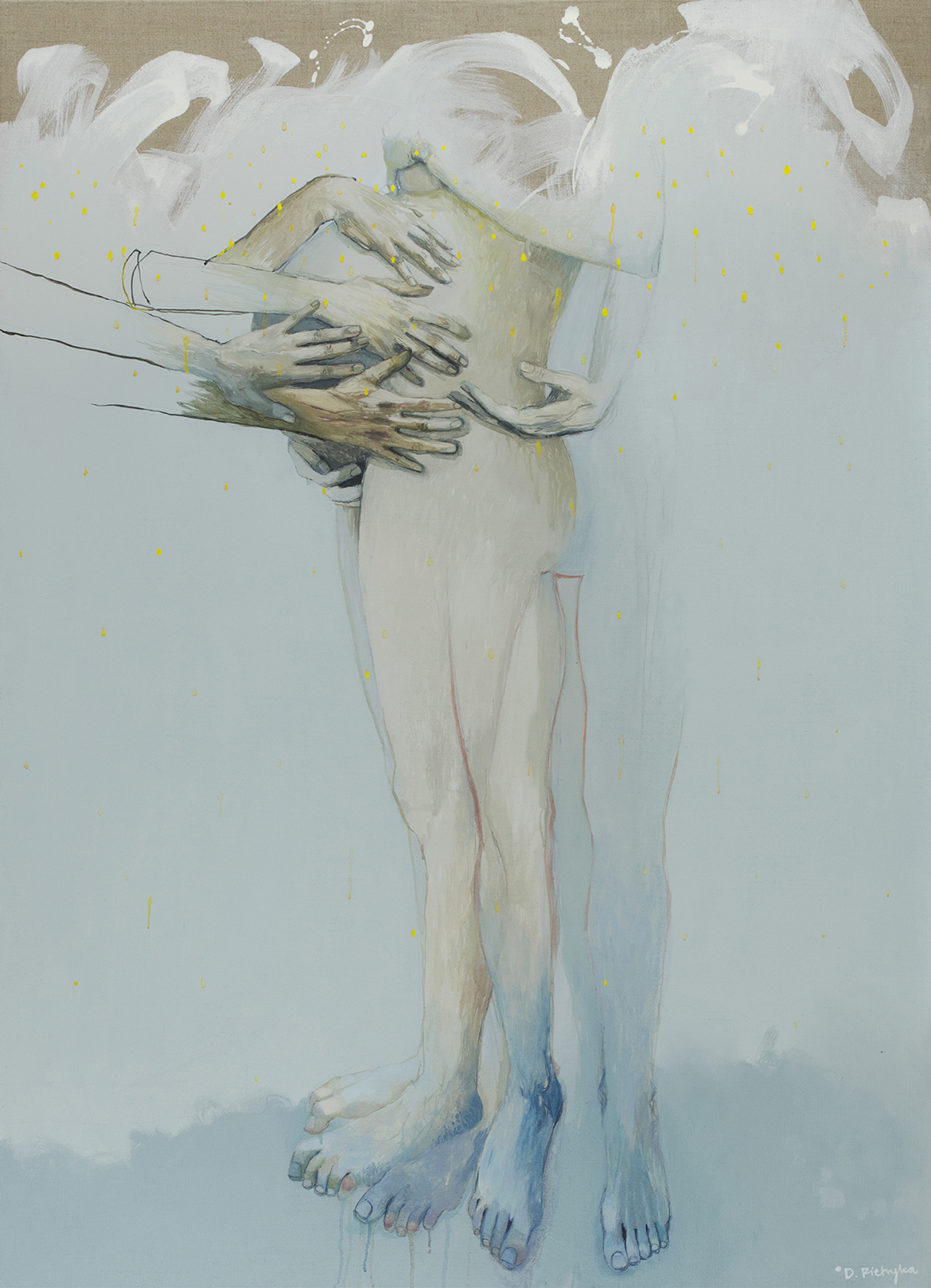 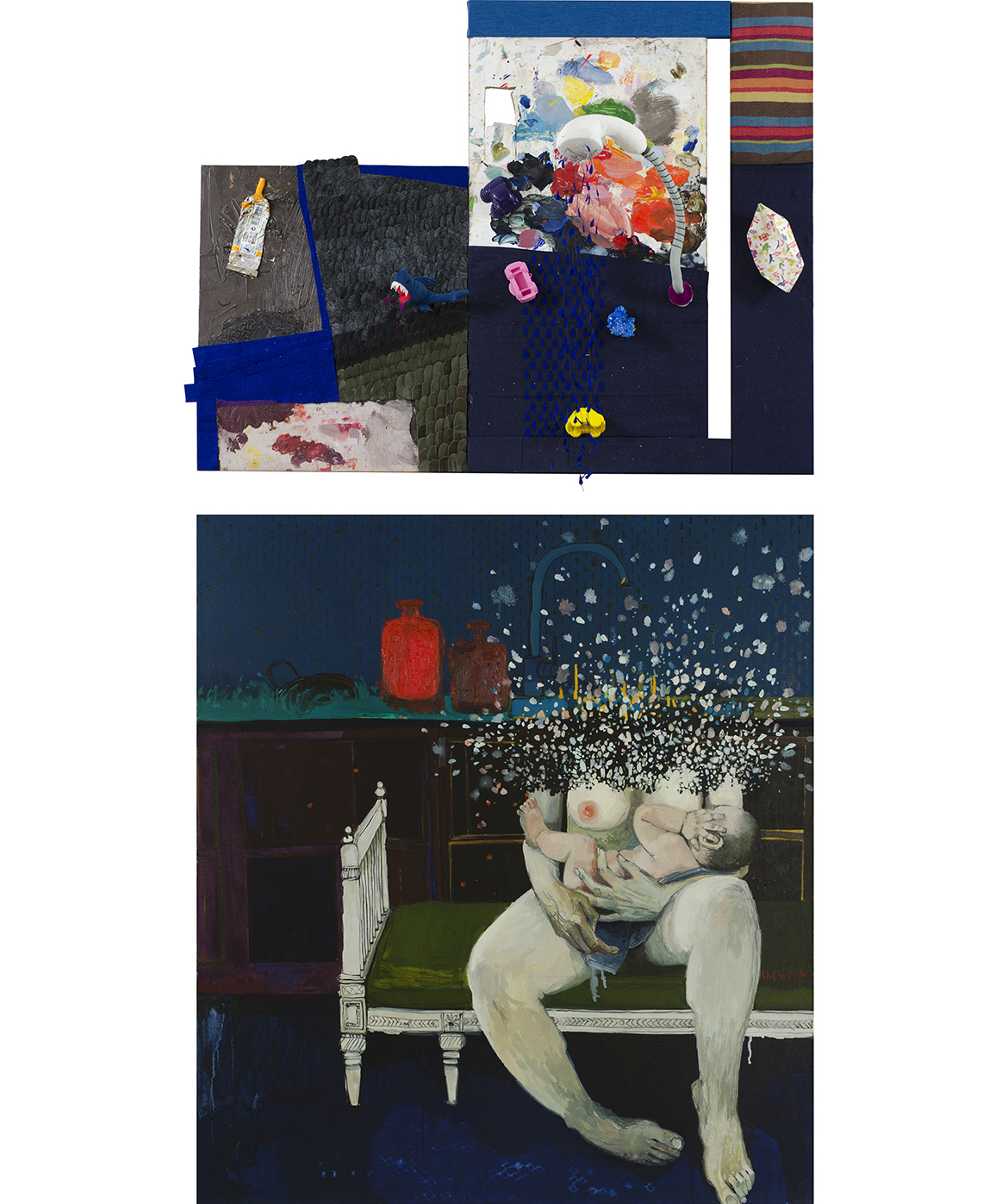 I disappear, 90x80cm + assamblage , oil on canvas / own technique 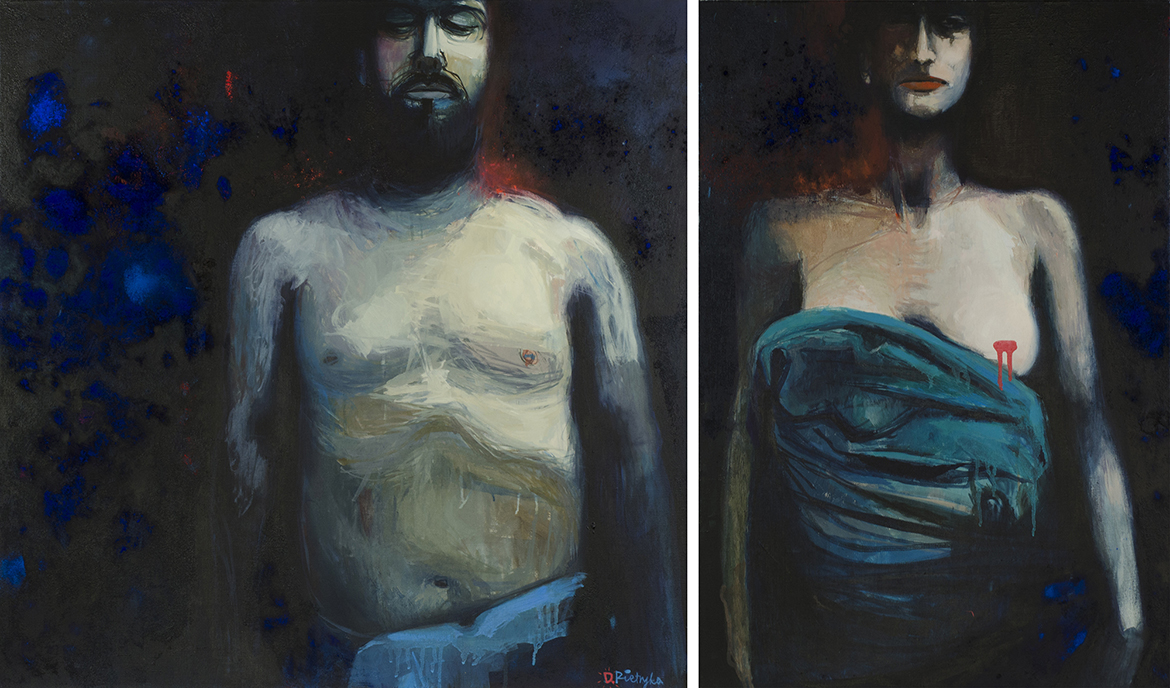 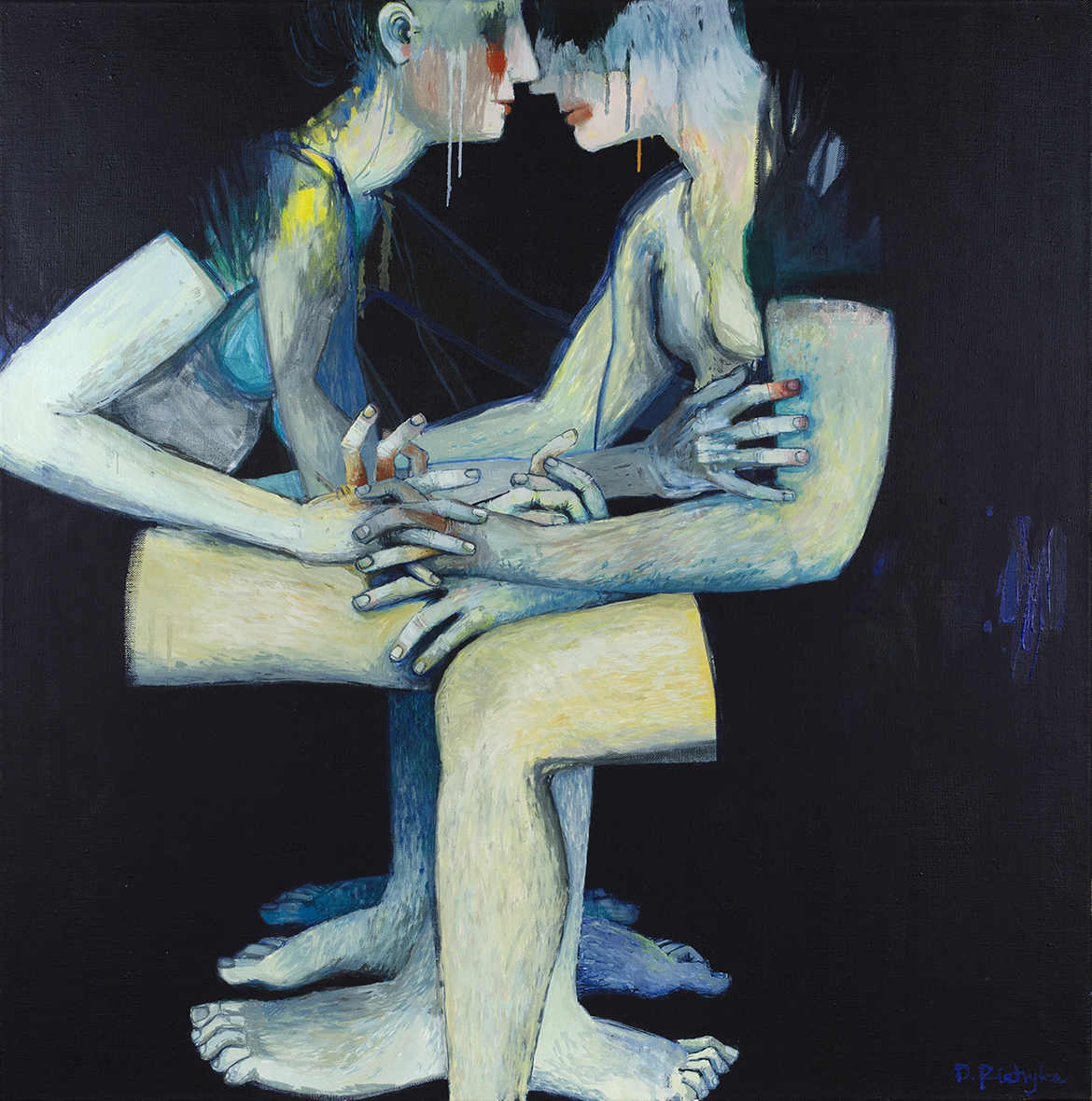 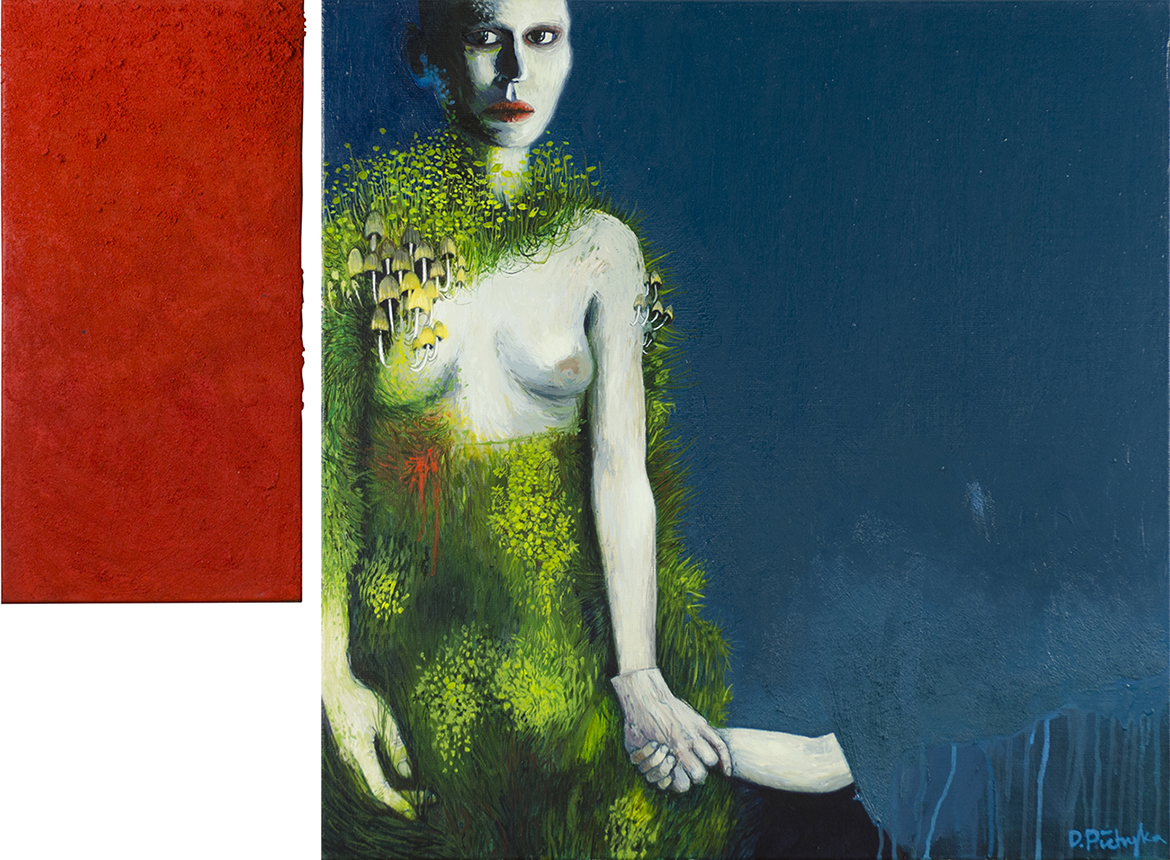 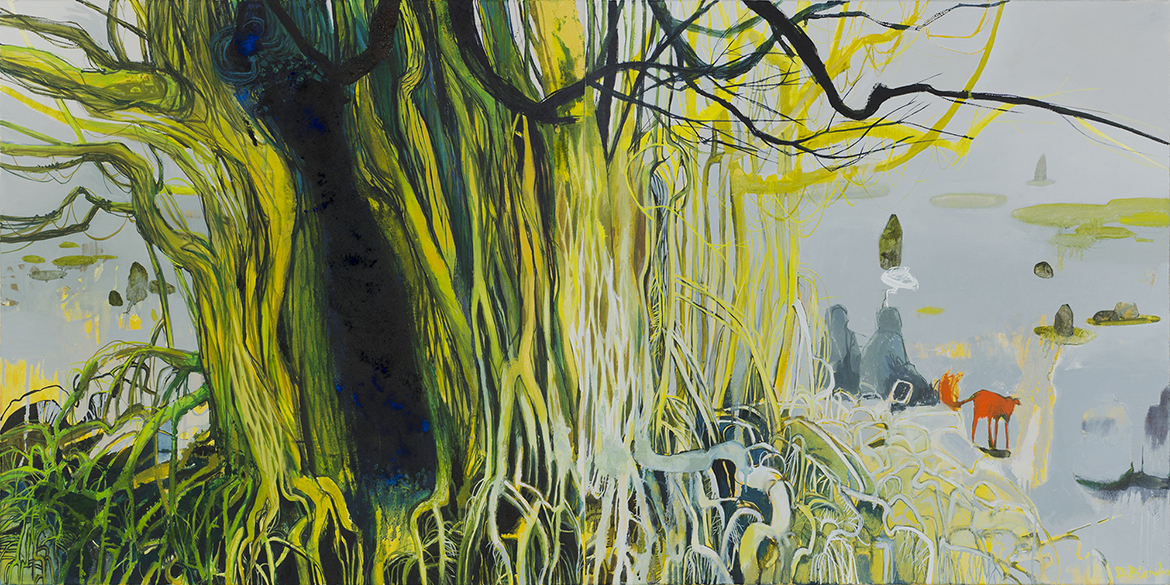 The Between Us exhibition at Gallery M, Wrocław 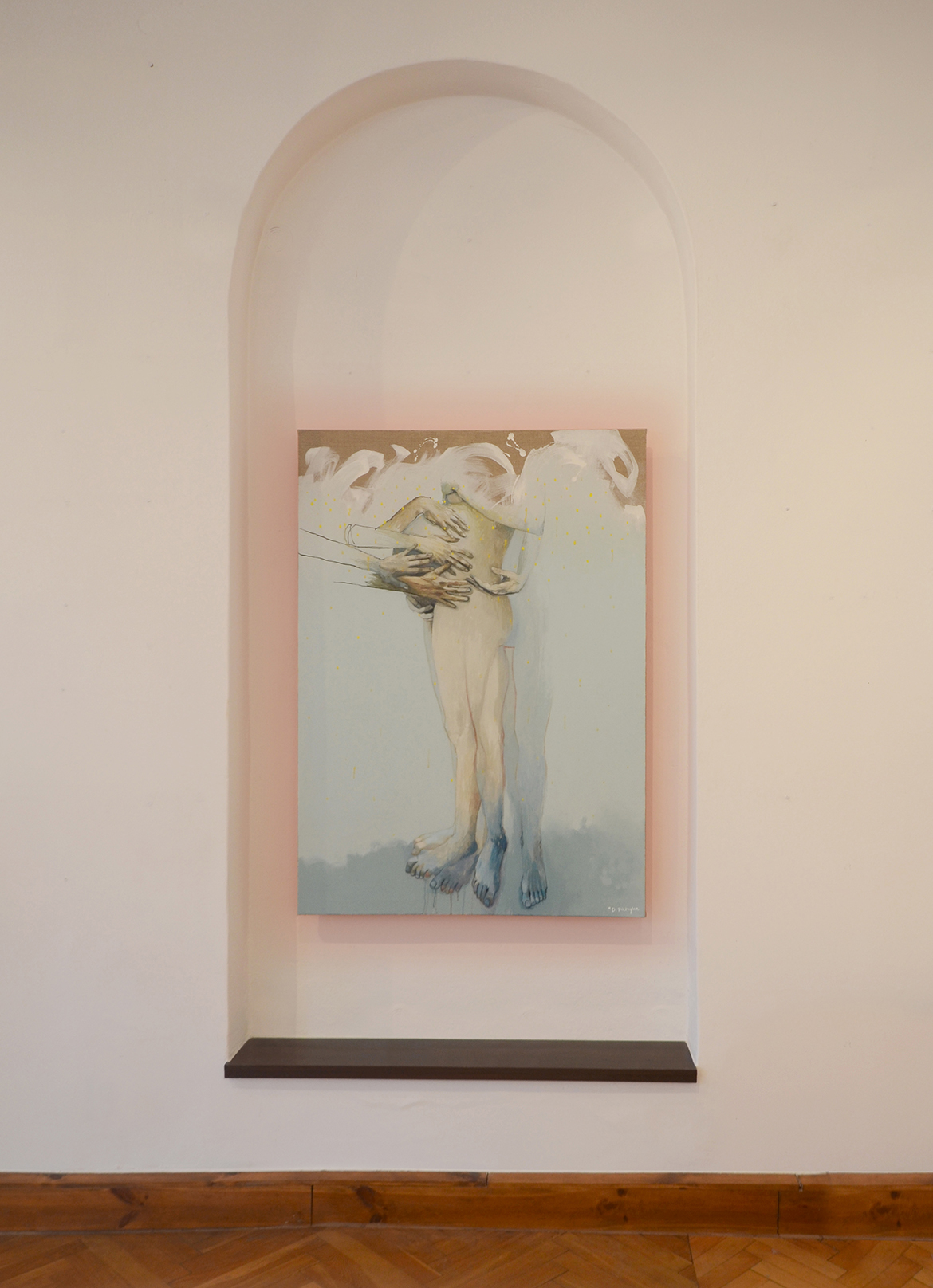 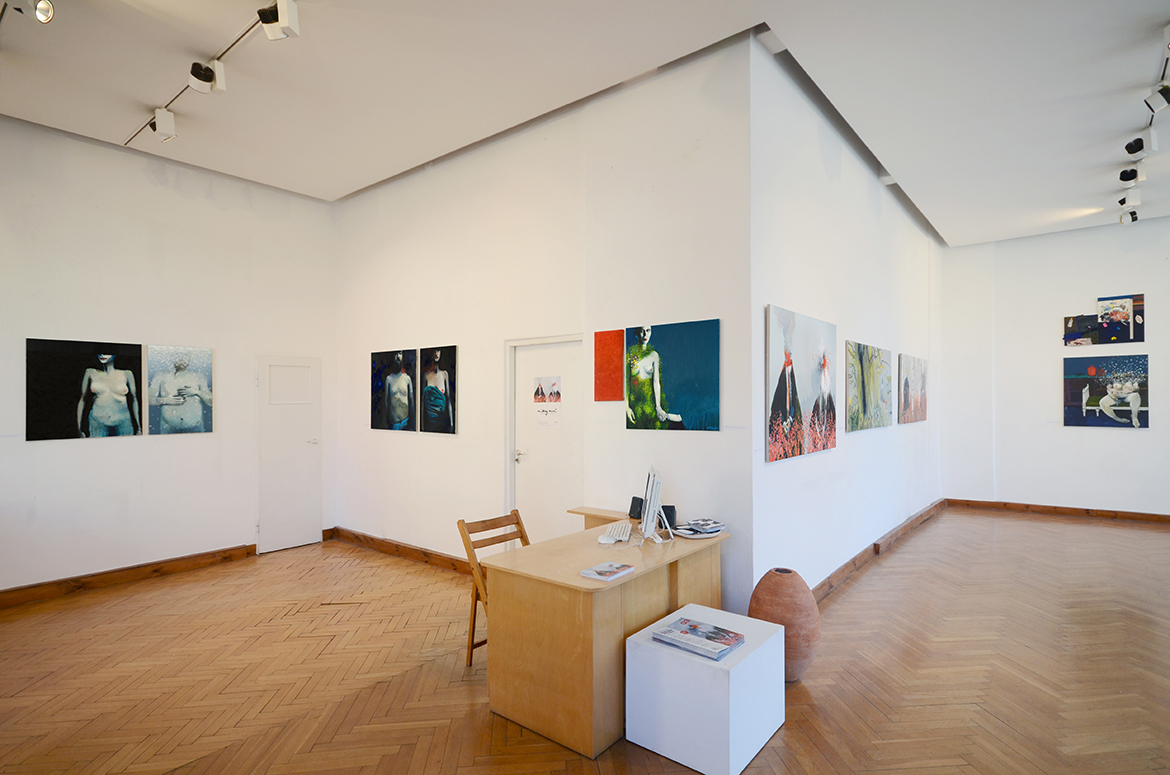 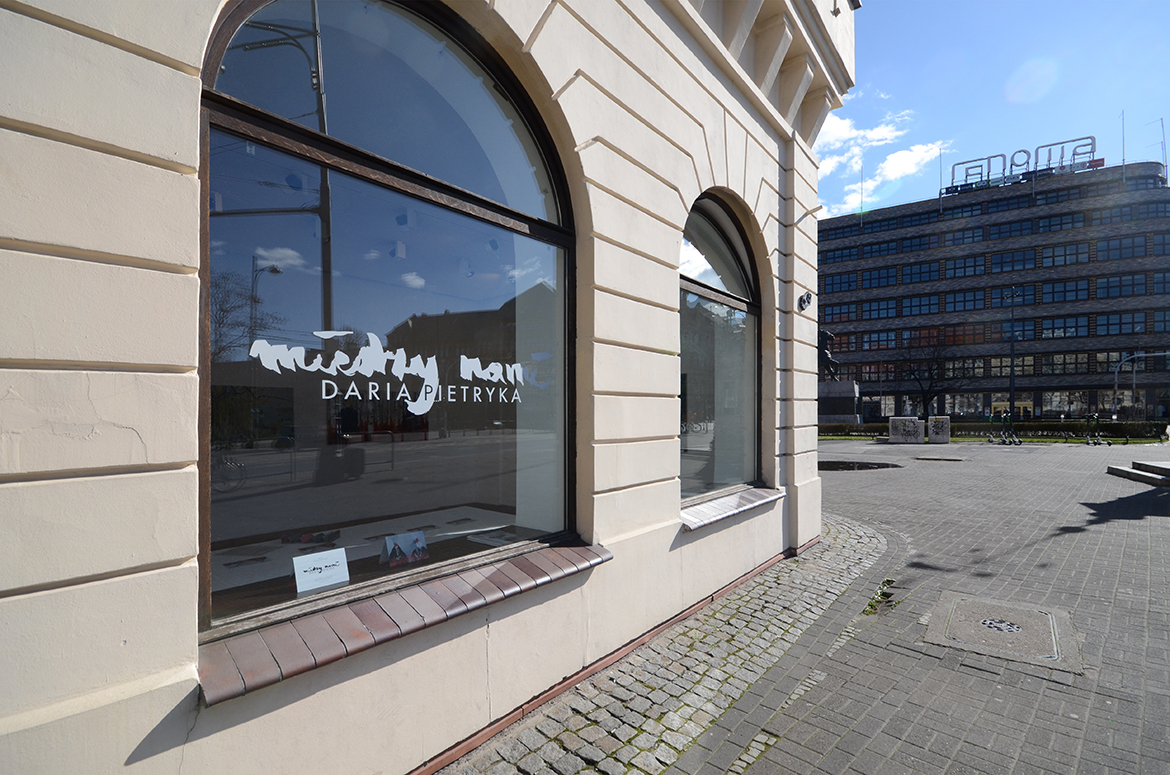